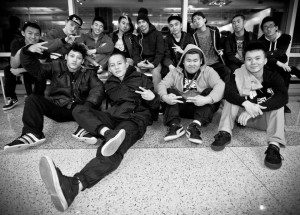 WarMachine was founded in 2010, with a common goal in mind: to unite all of the most dedicated, hard working, talented individuals throughout the Twin Cities to represent Minnesota as a whole. The “WarMachine” Crew consists of 3 of the top sub-crews (or original crews/groups) from around the Twin Cities. WarMachine is made up of Optimistic Crew- from Brooklyn Park, Looney Tunes Crew- also from Brooklyn Park, and Warriors Crew- from various suburbs around the St. Paul area. Since 2010 members from WarMachine have traveled around the world to places such as Los Angeles, Poland, Belgium, Orlando, Houston, and the UK. WarMachine most recently traveled to Boston to take part in various bboy/bgirl competitions and made it to the final 4 in one, and final 8 in another. Besides just being a competitive crew, they are also good friends and treat each other as extended family.