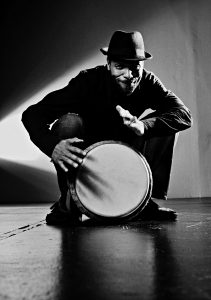 Truth Maze is a cornerstone of the Twin Cities music scene and a major contributor and pioneer of Minneapolis hip hop culture. Born William Harris, a native of Minneapolis, MN, his career started with having a strong rhythmic sense making him a natural drummer from birth. This natural ability would later connect to his uncanny skills as a verbal percussionist known as ‘The Unstoppable B-Fresh’ who started performing in 1984. Two years later he would become part of the premier recording group The I.R.M. Crew which at the time received national notice.

Truth Maze also recorded with Brown Mark of Prince’s Revolution, as well as a host of other guest appearances and compilation projects. His ﬁrst solo project was recorded and released in 2006, on which he would display his expanding versatility. The Expansions and Contractions’ album would prove Truth Maze’s skills as a spoken word artist and musician. A performer who comfortably expresses himself across various genres of music, eclecticism is but second nature to Truth Maze, an artist that easily accomplishes being multidisciplinary. Oya’s Radio is Truth’s newest visionary musical quest, and is once again evidence of his ability to stretch further, utilizing his vocal talent as lead man of the band.  Along with the aforementioned, Truth Maze is now experimenting with dance performance projects, theater, and future artistic collaborations, all while still working with various youth and community organizations.  His art is his passion, activism, and spirit.
Ladies and Gentlemen, introducing Truth Maze.
To date, some of Truth Maze’s notable performances include:
• 2013 Theater production of River See, written and directed by Sharon Bridgeforth
• 2012 Dance to Learn program at the Ordway Theater
• Amiri Baraka’s Wise Why’s Y’s at the Southern Theater
• North Minneapolis Tornado Relief fundraiser at First Avenue’s Danceteria with Hip Hop legend KRS-ONE
• Leeds England Reggae Festival
• Detroit Pistons Television commercial – Verbal Percussionist