Star Tribune:
“That tenderness and nuance, especially in the first act, are two of the things that make “Blood Knot” special. Another is the performances. Williams and Yoakam are delivering a master class in theatrical invention and humanity.”

How Was The Show:
“Pillsbury House Theatre makes Blood Knot, under the skilled direction of Stephen DiMenna, a multilayered journey through two men’s lives as they dream of a better fate.…Just watching Yoakam don a pair of boots or Williams soak his aching feet is a theatrical event.”

Play Off The Page:
“Williams and Yoakam are veterans of the stage. They are masters of their craft…Blood Knot is a powerful play, intimate, daring, and provocative. If you have a chance to see it, go.”

Cherry and Spoon:
“This is a powerful, intense, and sobering play, beautifully acted by two beloved #TCTheater veterans.” 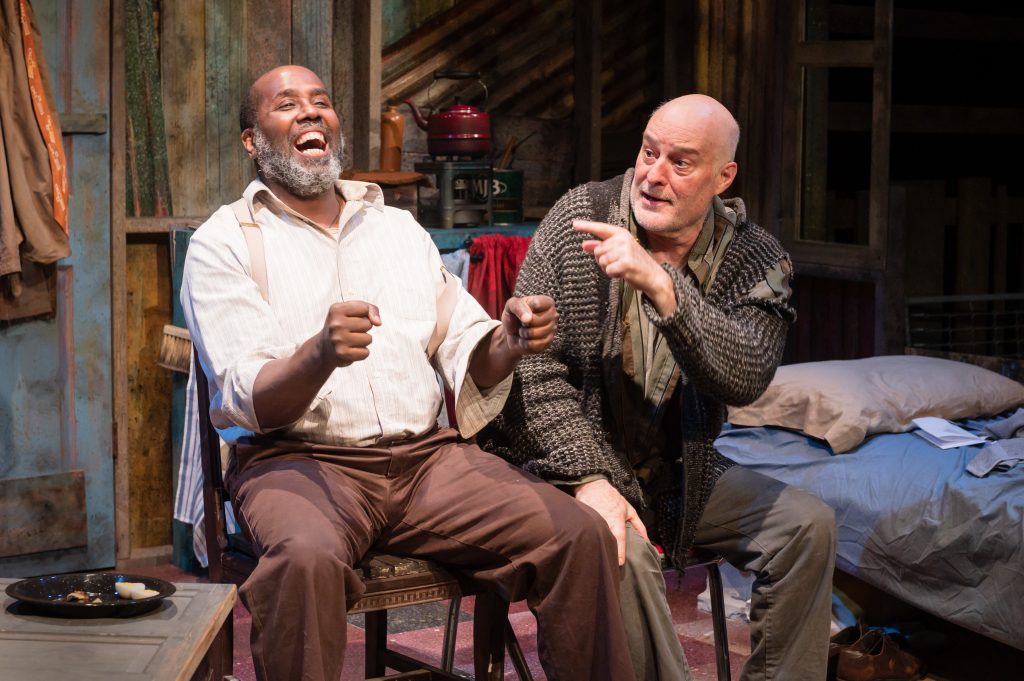 James A. Williams and Stephen Yoakam in Blood Knot.

Pioneer Press:
” …speaks with painful clarity and contemporary resonance about the roots and tendrils of  racism and privilege.”

City Pages:
“…two of the Twin Cities’ most compelling performers. James A. Williams and Stephen Yoakam build distinctive characters whose compatibilities and conflicts keep us involved from scene to scene.”

Talkin’ Broadway:
“…a bravura new production of Blood Knot, affirming the searing power and timeless incisiveness of Fugard’s work, amplified by towering performances from James A. Williams and Stephen Yoakam.”

MinnPost:
“The play should be seen at Pillsbury House for its production and its cast: James A. Williams as Zachariah and Stephen Yoakam as Morris. The two great actors have been friends for years, and they trust each other to play their parts to the fullest, even the ugliest, most shocking moments. It’s like watching two lions in a room.”

Lavender:
“a moving revival…powerful and lasting”

Broadway World:
“I urge the readers of this review to run to The Pillsbury House Theatre. You will sit in silent amazement like I did and see some great theatre.”

Get your tickets to see this powerful show by clicking here.