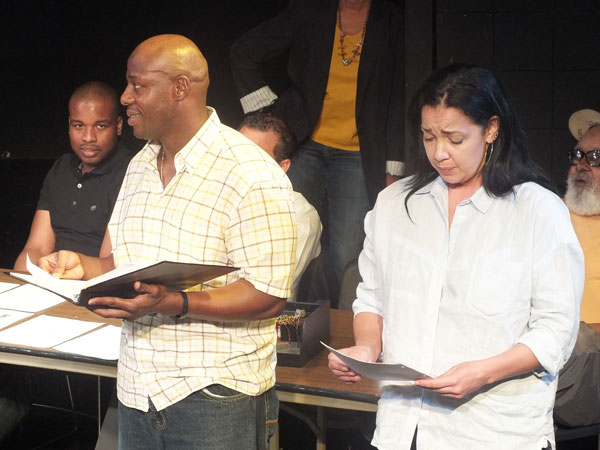 On Friday, August 23, we hosted an energetic preview and discussion of our upcoming show, the road weeps, the well runs dry, which plays September 27 – October 27 in our theatre. More than 70 audience members from all walks of life were introduced to the play by writer Marcus Gardley, dramaturg Nakissa Etemad, and director Marion McClinton while also learning from University of Minnesota Professor David Chang about the historical context of Native tribes in Oklahoma pre- and post-civil war.

This audience was the first to enjoy our amazing cast performing some scenes from the play, including an intriguing confrontation between two strong-willed men played by Ansa Aykea and Jake Waid; a beautiful heart-breaking monologue performed by James Craven; and a hilarious recitation from Harry Waters, Jr. that brought down the house. It isn’t an exaggeration to say that this play has a little of everything. (See pictures of the event on Flicker.)

“Why did you write this play?”
In the question and answer period, Marcus explained how he initially was inspired to write about an all-black town by reading Toni Morrison. Research led him to the unexpected discovery that he actually had ancestors in the first incorporated all-black town of Wewoka, OK.

“What kind of responses have you received so far?”
Marcus and Nakissa told stories of how presenting these untold stories of American history can bring up a lot of complicated emotions for a lot of people but how, after one reading in Los Angeles, an audience member simply exclaimed, “Yes! It’s about time someone told this!”

“Was there slavery in Native American culture in the 19th century?”
Prof. Chang explained that while in any community there are always variations on how individuals behave, for the most part, the institution of slavery as we know it was not consistent with the attitudes of most Native tribes, including the Seminoles.

For additional insight on this dialogue, read .

the 1st show is today
Breaking Ice in Bancroft