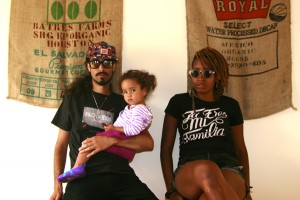 Sarah White is a singer, emcee, musician and photographer known for her sultry voice, conscious message and experimental sound. Sarah has won Scion’s Electronic Vocalist Competition, and has been on releases from various projects and labels since she joined the scene in 2002.

Rico Simon Mendez is a producer, musician, dj and certified sound healing practitioner with a passion for world music, indigenous instruments and rhythms. Rico previously developed and produced an eclectic and award-winning radio show for The Current, and is branching into sound design for commercial and tv. In 2005 they began to embark on a musical journey to merge love, culture and music, and have recently put out their second release, Sarah White’s – Space Madness. Together they have shared stages and collaborated with many talented acts, including King Britt, Jose James, Questlove, J*Davey and many more.

Fresh and returning from 5 years in New York, they are coming together to create the Cultura Love Experiment, a collage between electronic and indigenous sounds.

Cultura Love Experiment will be performing with special guests from the Twin Cities music scene along with a layer of visuals.