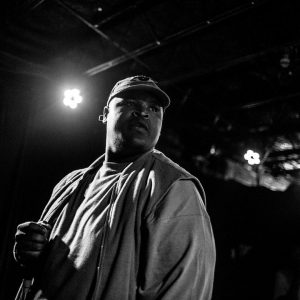 Rich Garvey’s 40 min set will be comprised of 20 mins of live production using Ableton live, a laptop and an interface.

Rich Garvey is a Liberian Born-Minneapolis based Emcee, Producer, and Engineer. Since 2011 he has been consistent in the Twin Cities, performing at countless venues and gaining more listeners respectively. Having an African background exposed him to many genres of music including, Zouk, Calypso, Reggae, etc. This diverse background adds depth to his musical palette and is apparent in his production and subject matter. His music can also be describe as witty, lyrical, insightful & melodic.

In May 2013 he released his first EP “Rich In Spirit” a 7 track monthly series that gained a lot of notoriety from Local & National media outlets. Including KevinNottingham.com, Everydejavu.com, CityPages.com, etc. It highlighted Rich’s ability to consistently release music on a deadline, and it showed he could handle the pressure of a time crunch.

In November 2013 he released “Road To Riches,” an instrumental project highlighting his skills as a hip-hop/ experimental producer. The project was a classic beat tape that anyone could freestyle or write to. “In life, the best things are free, and that is the sentiment of Road to Riches”

Now in 2016 he is releasing “Man Of The People”, an EP produced entirely by Travis Gorman. The project features artist such as Devon Reason, Finding Novyon, & K Raydio and is slated to be released Fall 2016.