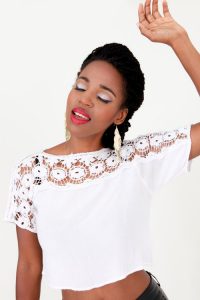 Described as “charmingly eclectic” by St Louis Today Pyeng Threadgill sings ‘New Porch Music’ crafting an intimate journey through folk and Jazz with Afro- electronic inflections. In the midst of developing her fourth solo album and a multimedia project entitled Head Full of Hair, Heart Full of Song, Ms. Threadgill shines a light on hair, adornment, and ancestry, and the conflicts therein.

Explains Pyeng, “Well interestingly, it’s kind of the blues that got me on the path to writing Head Full of Hair. I was singing Robert Johnson and Bessie Smith and I realized I needed to sing my own blues. And hair for Black women is such a raveled and weighty topic,” says Threadgill. “It’s almost like talking about sex or something, it’s really personal”.

As Pyeng began composing the project, stories of her grandmother and heritage took root, further inspiring her writing. However, it was Head Full of Hair’s intended audience that really created a deep-seated motivation.

“This is the first time I’m actually writing an album for young girls, specifically girls of African descent. I wanted to create some kind of anthem for us, and for my daughter. I just realized hair is really about choice. Having the choice to do your hair the way you want and choosing to see your own natural beauty. That can be everything for a young girl,” she states.

Head Full of Hair, Heart Full of Song is expected to release in 2017. However Pyeng isn’t stopping there. Accustomed to having several irons in the fire at once, Pyeng is simultaneously crafting a musical homage to blues legends entitled Bessie, Billie & Bob.

This is nothing new for a veteran of the recording industry such as Ms. Threadgill. Since 2004, she has released three solo albums: Sweet Home: The Music of Robert Johnson (Random Chance), Of The Air (Random Chance), and Portholes To A Love & Other Short Stories.

“I always think about how crazy it was that I released my first album and had my daughter in the same month!” she exclaims. “That could have been an album right there….But you know Sweet Home was like a treehouse project. We really had time to play then. I wanted each song to be able to stand on its own like a short story or film,” explains Threadgill.

In both a literal and figurative sense Pyeng’s music journeyed to California. It was there that she cultivated her sophomore album. Of The Air, a departure from her previous recording, was a musical self-discovery in which she reconnected with her essence as a writer.

“I was working with a new band and living in a new place. So all of that plus being a young mom created a different sound. I had…air,” she says.

Restored from the spaciousness of California living, Threadgill returned to New York with a craving for something grittier. This desire merged with a new writing idea giving birth to her album Portholes To A Love & Other Short Stories, a body of work based on short stories by well renowned authors. It also garnered an award in music composition from New York Foundation for The Arts.

“You know with Portholes we played those songs in a lot of places,” says Threadgill, “in the states, abroad, I had a regular residency at Nublu and that really creates a bond between the band and the music.”

With several more years of writing under her belt and time with her New York band, Pyeng developed and performed the song cycle Songlines: Singing The Land, a collection of compositions inspired by environmental/natural disasters and the meeting of African and Indigenous life philosophies.

“I guess I’m always looking for what issue or theme is driving me. And with Songlines I started having this deep physical reaction to what was and has been happening to the planet. You know there seems to be a correlation between that and where we stopped listening to what African and Indigenous people have brought to the table. So those songs feel really tender…and angry too.”

In between her own work as a bandleader, Pyeng made memorable appearances in significant works such as the 2007 documentary Retour A Goree by director Pierre-Yves Borgeaud, starring Senegalese superstar Youssou N’Dour.

More recently Threadgill has shared the stage with pianist/composer Marc Cary on his Abbey Lincoln tribute, the Urban Bush Women’s musical SCAT, and with Contra Tiempo also as a writer/performer in Agua Furiosa and as a performer in Full Still Hungry. She has also accompanied poet, author, playwright hattie gossett as a soundmaker/actress on her Conjure Wimmins Project.

Yet still Pyeng Threadgill feels most at home when fronting her band and singing her original progressive porch songs. Of the live experience she concedes, “That’s not to say that I don’t get nervous but I just feel like that gift was given to me, like it’s truly me, kind of like my superpower,” she says smiling.

Pyeng Threadgill has appeared at the Blue Note Late Night Series, The Jazz Standard, San Sebastián Jazz Festival (SPAIN), Yoshi’s (San Francisco), Rocce Rosse & Blues Festival (Arbitax, Italy), Rockwood Music Hall, Detroit Institute of the Arts, Sunset/Sunside (Paris) and others. She lives and teaches in Brooklyn, NY with her husband and daughter. Her upcoming album and multimedia project Head Full of Hair, Heart Full of Song is due to release in 2017 with the crowdsourced fundraiser to conclude this winter.