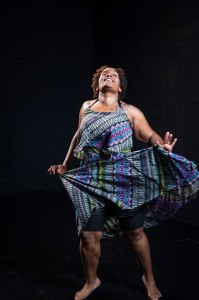 Runnin’ is an autobiographical, one-woman performance by acclaimed soul singer PaviElle French. Using song, storytelling, and dance, PaviElle shares the highs and lows of her life growing up “Young, Gifted, and Black” in Saint Paul’s historic Rondo neighborhood, and how those experiences have formed her into the person she is today. Confronting addiction, death, sexuality and self-worth, it’s a candid look at one woman’s life that touches the humanity in us all. Runnin’ is PaviElle’s debut piece as a playwright and the first installment in a series of stories she is creating to “release her life’s demons and get free.” This piece will move you, open your eyes, and awaken your spirit.

BIOGRAPHY
PaviElle French is an interdisciplinary artist who focuses on bringing an aesthetic of love, light, and ancestral spirit to the stage. Growing up in the Rondo neighborhood of Saint Paul as a child performer, she was classically trained in voice by Patty Lacy and Libby Turner as well as in voice and piano at the Walker West Music Academy. She had the honor to sing with the Saint Paul youth choir, “City Songs” from 1994-1996.

In 1997, she began acting, as well, with training received from the Penumbra Summer Institute. Shortly thereafter she was featured in two plays at Steppingstone Theater. In 2001, PaviElle joined the spoken word / hip hop collective EduPoetic Enterbrainment at 17 years old. She participated as a singer songwriter on one album, “Patriotic Duty” (2002) and two US tours, opening for such prestigious artists and Anthony Hamilton and The Last Poets.

Since 2002, PaviElle has been a solo artist. Most recently, she has been seen in Ahanti Young’s one man show, Aklund Sowell (2012), Penumbra Theatre’s Black Nativity (2013), and her own live show along with her 9-piece band at the Icehouse in Minneapolis where she has a residency.

Tickets: Buy tickets online or call 612-825-0459.
Pay-What-You-Want. Pick your own price for every performance, every night.
(Regular price is $16. Anything above $16 is considered a donation.)