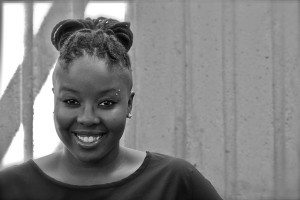 Deja Stowers  began dancing at the age of four in the drill team African Perfection.  She continued to dance throughout her junior high years and began to take interest in West African dance.  Deja has studied with the masters of West African dance.  She now is a dancer in the West African company Voice of Culture Drum and Dance.  Deja’s personal works look through a specific African American lens to create art for social change.  Last year, she finished and performed the final chapter to her one woman show called Orange. Deja has graduated from Penumbra Theatre’s Summer Institute program and continues to create and perform work in the Twin Cities for social change and equality.

The work she will be presenting at the Late Nite Series is called Embolus. Embolus is a new work in progress based on the effect that the death of men has had on her life. Her story will be told interchangeably by three males.