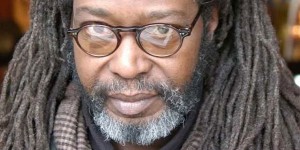 J. Otis Powell‽ is a poet, mentor, consultant and performer working in aesthetics rooted in Afrocentric lore and culture. His work is informed by oral traditions in literature, music, and the Black Arts Movement. Powell‽ was a cohort in Intermedia Arts’ Creative Community Leadership Institute and served on a community advisory panel to create Spirit Reach: a Tribute to Imamu Amiri Baraka. He currently works as a consultant and coordinator for the Verve program for emerging writers. J. Otis‽ studied with Gloria Anzaldúa, Quincy Troupe, Amiri Baraka, Alexs Pate, Sekou Sundiata and Yusef Komunyakaa. He worked as co-mentor and performed with Amiri Baraka for the Givens Writer’s Retreat and with TruRuts Endeavors in a production of Whys, Wise, Ys. Grants and awards include: recipient of a Loft Creative Nonfiction Award, a Jerome Travel and Study Grant as well as a Jerome Mid Career Artist Grant and an Intermedia Arts Interdisciplinary McKnight Fellowship, among others.

Mr. Powell‽ is a coeditor and contributor to Blues Visions an anthology published by the MN Historical Society. His writing was included in: Barefoot In The Mountains, Views From The Loft (an anthology) and his poetry was featured in Bringing Gifts, Bringing News an anthology of poems from Downstairs Press. A CD project titled BALM was released through TruRuts/Speak Easy Records.

He was a founding producer of the award winning Write On Radio! at KFAI-FM in Minneapolis while working as a program director and community liaison at the Loft Literary Center. He wrote, with editorial collaboration and design from Rain Taxi a chapbook titled Pieces of Sky.