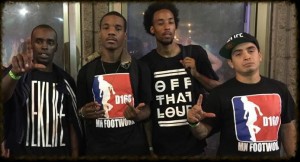 “This guy is so into the music its contagious. His finger work is fresh and fast. His timing is impeccable. And when he is off stage, he is at the edge of the dance floor close to the performers dancing and giving props. This guy lives and breathes beats and flow like no other.”– Ian Indo

The next time you walk into the spot looking for his style and the steward asks you how you want it served. You look that soda jerk square in the eye, grab him by his favorite suspenders, and retort:

“A dirty glass comprised of Turntablism, equal parts Juke/Footwork, the zest of DnB, a snare snapped at 160bpm, and then kick it in the side with an 808.”

D’jo, a turntablist with roots firmly planted in Texas during the bolstering Dnb scene of the early 2000s, relocated to Minneapolis, Mn in 2006.  In 2011, D’jo was introduced to juke/footwork by FreshtillDef and Moondoctor.  Consequently, over the next year, he would submerge himself deep into the culture of footwork.  From that time, he aided the two in the conception of Freshmoon Records, LLC., and continues to be an integral part in the further development of the label.

For 2013, he launched DISTRICT160, the collective dedicated to the cultivation of the Minneapolis footwork scene. Consisting of djs, producers, artists, and dancers, D160 comes together bi-weekly for D160:OnSite. An event series that creates an environment for everyone to experience the culture of footwork. D160:OnSite events are broadcasted live on location in downtown Minneapolis at Maruso, via Mixtube.dj. Furthermore, the proclaimed duke of Minneapolis juke, has since been inducted into TekkDJz. Founded by the late DJ Rashad and Traxman, TekkDJz is comprised of hand-picked djs and producers from around the world who are committed to:

“Saving the world from bad music.”