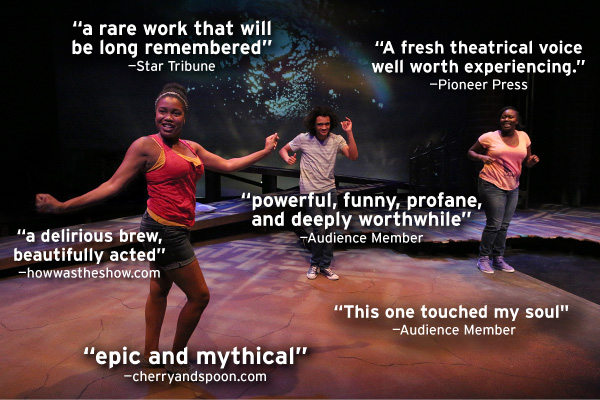 The reviews are in!

Marcus; or the Secret of Sweet is a Pillsbury House Theatre and The Mount Curve Company co-production in the Dowling Studio at the Guthrie Theatre, September 12 – October 5, 2014. Reserve your tickets through the Guthrie’s Box Office online or by calling 612-377-2224.

Marcus; Or The Secret Of Sweet by Pillsbury House Theatre and the Mount Curve Company, performing in the Guthrie’s Dowling Studio
By John Olive, howwastheshow.com

“See this intoxicating play: it will make you want to leave dreary and frigid Minnesota and move to moonstruck Louisiana, a land of sun-showers, nighttime assignations on the bayou, intricate family relations, powerful friendships.”

Theater review: ‘Marcus; or the Secret of Sweet’ gets a production to be remembered at the Guthrie
by Rohan Preston, Star Tribune

“[Nathan] Barlow…delivers a breakout performance that is grace-filled and revelatory. He handles his two major monologues, both Shakespearean in their heft, with charisma and aplomb, inviting us into his heart, his hopes and his reveries. But his brilliance is far from solitary… All the players in “Marcus,” who sit at the side of the stage when not performing, have moments when they light up the stage with their individual fireworks..” Read the full review »

‘Marcus; or the Secret of Sweet’ review: Fresh, heartfelt
By Rob Hubbard, Special to the Pioneer Press

“The Pillsbury House/Mount Curve production deftly brings out both the mystical and earthy in McCraney’s play, the staging spare, the technical effects minimal but timely, and most of the performances convincingly crafted.” Read the full review »

“Tarell Alvin McCraney’s Brother/Sister Trilogy has become one of the major dramatic works of the current era. Pillsbury House and the Mount Curve Company co-produced the first two plays at the Guthrie’s Dowling Studio. Now they are presenting the final and best of the three in the same venue by the same director, OBIE-winner Marion McClinton.” Read the full review »

“Marcus; or the Secret of Sweet” by Pillsbury House Theatre at the Guthrie Theater
by Cherry and Spoon

“Talented young playwright Tarell Alvin McCraney has such a unique vision and voice, and these three plays create such a specific world with people that are familiar and beloved.”

Marcus; or the Secret of Sweet – A Review
by evolvingsoul11.com

“The Dowling Studio provides such an intimate setting for this story. The actors larger than life emotions and depth sweep you away into the bayou, into the storm that is coming literally and figuratively. As you watch Marcus unravel his dreams and truth, you will see some of your own life but also life through new eyes, with profound insight. This play takes touchy subject matter, makes it real and teaches us with plenty of humor along the way.” Read the full review »

Marcus: Part Three of a Trilogy Goes Wandering Off in the Dark
by Star Tribune

‘Marcus; or the secret of sweet’ builds a community on and off stage
by Euan Kerr, Minnesota Public Radio

Listen to the full story »

Nathan Barlow embraces the words for Marcus; or the Secret of Sweet
By Ed Huyck

Marion McClinton: A man made by theater
by Rohan Preston, Star Tribune

For Discussion: MARCUS; OR THE SECRET OF SWEET
Nov. 08 // Jordan Hamilton