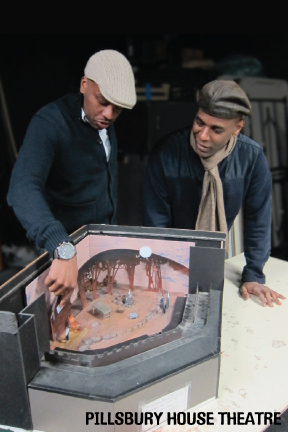 The list of playwright Marcus Gardley’s achievements is long enough to impress even the most stoic Minnesotan. His most recent play, every tongue confess premiered at Arena Stage in Washington DC starring Phylicia Rashad; his musical On the Levee was produced by Lincoln Center in New York. He is the recipient of numerous awards including, most recently, the USA Artist Fellowship and resident playwright fellowship at Victory Gardens Theater in Chicago.

Yet, even with all that national attention, Marcus is excited to bring the premiere of his next play the road weeps, the well runs dry to Pillsbury House Theatre. “I’ve been following a lot of the amazing actors from Minnesota for a long time,” he recalls. Plus, director Marion McClinton, “understands the play in its bones. I’m really excited about his interpretation of the script.”

Most of all, he’s attracted to the fact that PHT’s high quality work is so closely tied to the community where we live. “I started out as a writer that went into community in San Francisco and did free theater.” He’s looking forward to seeing how this production can spark a deeper conversation in the neighborhood about what it means to be “mixed” as citizens of the United States.

Your donation makes it possible to bring Marcus to Minneapolis to participate in rehearsals and dialogues with the community.