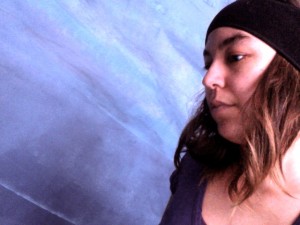 Malia Burkhart is a multidisciplinary Performance Artist, Arts Educator, Earth-Activist, and Healing Arts Practitioner.  Malia graduated from the Perpich Center for Arts Education in 1994.  She received a BA degree from St. Olaf College with a double-major in Studio Arts and a Paracollege Concentration in “Art as Community Activism.”  Malia trained in Performance Art at The School of the Art Institute of Chicago, and has studied Butoh Dance with Min Tanaka (Yamanashi, Japan), Ken Mai and Bridget Satsuki (Kyoto, Japan), and Gadu Doushin with the Nenkin Butoh Dance Group (Minneapolis).  In 2011, Malia graduated from a 2-year program at Green River Dance for Global Somatics as a certified Global Somatics Practitioner, an embodiment modality applicable in performance and activism, as well as massage and movement therapy.

Malia Burkhart spent a decade of her arts-career as a puppet-builder, performer, MayDay Parade artist, and collaborator in several mainstage productions, as an Associate Artist with In the Heart of the Beast Puppet and Mask Theater and the Barebones Artists Collective.  Malia participated as a fellow in the 2007 Naked Stages Program, with her production The Survival Pages.   In 2010, Malia produced, directed, and performed BreatheLoveKnowRelate (Dreamland Arts, St. Paul), as a recipient of an Artist’s Initiative Grant through the MN State Arts Board.  In recent years, Malia has been networking and organizing within the movement for Environmental and Social Justice, connecting arts, activism and practices in health and wellness.

Two Hands; Witchhunts and Wolfhunts
Malia Burkhart performs as Two Hands, a wise fool character who sees above, below, and within our modern context, through the longterm view of human and earth history.  Spinning folktales with current events, Two Hands translates songs and stories from othersides of culture and ways of thinking with curiosity and a sense of humor. 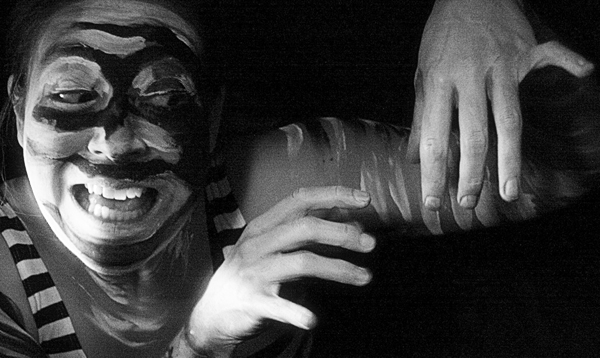