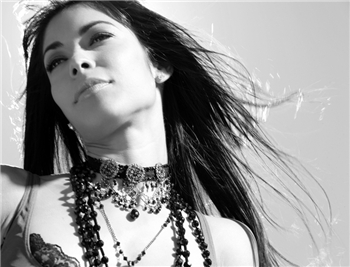 Nuyorican - Caridad De La Luz a.k.a. "La Bruja" brings her Bronx flavor to life through poetry, storytelling and hip hop, sharing what it's like to be Puerto Rican from New York.  This 45 minute set will be performed in English / Spanish a.k.a. Spanglish. Performing songs from her albums Brujalicious and For Witch It Stands combined with poems from Def Poetry Jam and characters from Boogie Rican Blvd. - a hip hop musical written by La Bruja whom NY Times called "a juggernaut" after it's opening in Times Square.

Caridad De La Luz is a Bronx-born performer known as  LA BRUJA.  She is considered one of America's leading  spoken word poets.  In 2014 she was awarded Comité Noviembre’s Puerto Rican Women Legacy Award, in 2013  The Edgar Allan Poe Award for excellence in writing from  The Bronx Historical Society and honored as A Bronx Living Legend by The Bronx Music Heritage Center.  She was recently presented with a Citation of Merit from The Bronx Borough President.  This Renaissance woman has performed internationally including The Apollo, The Museum of Natural History and the famed Nuyorican Poets Café where she began her career.  NY Times called her "a Juggernaut" after the off-Broadway run of her musical Boogie Rican Blvd.  Her acting career has taken her from stage to film: appearing in numerous movies including Bamboozled, Down to the Bone, El Vacilon and Gun Hill Road.  She has crossed over internationally as a recording artist with her debut album "Brujalicious" and “For Witch It Stands”.  She is featured on Prince Royce’s award-winning album "Phase II" and Bobby Sanabria’s Grammy-nominated album "Multiverse."  Well known for her captivating performance on Russell Simmons' HBO Def Poetry Jam, she was featured on HBO Latino’s installment of HABLA Women.  She works with youth throughout the country teaching poetry workshops for Pepatian.org & NYC Mission Society, is a board member of Voices UnBroken and a chartering member of Omega Phi Beta Sorority, Inc. - Delta Chapter at Binghamton University. For more info go to: www.labrujamusic.com