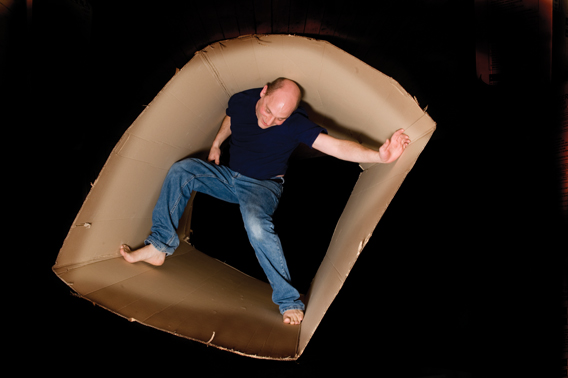 Using live-action sculpture and a collection of semi-improvised rants on gravity, relativity and escape velocity, Julian McFaul seeks to prove that, even in the inescapable misery of the present, joy is continually inevitable. Disappearing Trick is simultaneously a meditation on providence, creativity, and the folly and the necessity of looking outward to avoid looking within one’s heart and its present and possibly impermanent condition of misery.

In form, Disappearing Trick details the artist’s abusive affair with the cardboard box. The performer is born of, immersed in and ultimately seeks to lay waste to this infatuating and infuriating world of trash. Using nothing but the useless kung fu of staplers, knives and an insatiable pop obsession with special relativity the artist creates and resists goddesses, rockets and hyperbole.

Julian McFaul continues his kinetic approach to both acting and sculpture, this time in a piece that attempts to put these skills simultaneously to the task of performing. Joy, Liberation, Trash, Bullshit are continual themes of exploration for McFaul who relishes peeling away onion-skin-layers of shit and truth on the perhaps noble but ultimately unachievable crash towards truth and existential authenticity.

Julian McFaul is an actor, teacher and sculptor. A founding member of Bedlam Theatre, he was a leading actor and designer for the company’s first ten years, where he wrote, directed and designed Terminus (2002). Julian has been involved as an actor notably with Mabou Mines, Improbable Theatre, Open Eye Figure Theatre, Theatre de la Jeune Lune, Children’s Theatre Company and with In the Heart if the Beast Theatre’s “Mayday Celebration.” He is looking forward to several productions with Theatre Novi Most in 2010.