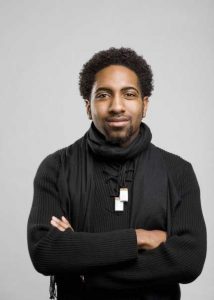 Interdisciplinary artist Julian Hines a.k.a. the JAHNERAL has created a kaleidoscope path in his artistry for over 10 years in the Twin Cities and abroad. He has studied various genres of dance primarily focused on West African, Hip Hop and Step. Abroad, Julian has taught, danced and held position as the choreography director for JAPAN ONE LOVE TOUR 日本, a concert tour to benefit Japan’s Tsunami relief foundation. His own work has been featured in ROOTED: Hip Hop Choreographers’ Evening 2014, which soon followed a Sage Award nomination for Best Ensemble (Nostalgia). Taking a change of pace, Julian’s skills and talents took him behind the curtain as stage manager in numerous performances and productions at Intermedia Arts alongside various performance spaces. Including the world premiere of Maia Maiden Productions  Sistah Solo | Being Brothas (2015) and Sage Award-winning ROOTED: Five Year Anniversary (2016). As of late he celebrated success with his production team as McKnight Foundation International Choreographers recipients of 2018. Hosting world renown South African Pantsula collective Impiloma Pantsula at Rooted 2018. This Fall he was just added to the Cowles Center for the Arts Teaching Artist Roster. He continues to accept new challenges as the Production Manager of ROOTED and Sistah Solo | Being Brothas and is always up for stage management hire. 🙂