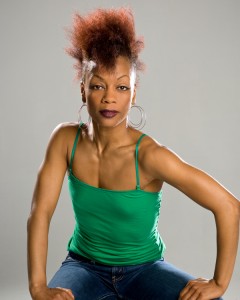 Iris Wilson is an original (featured) cast member of the 3 time Tony award winning Broadway musical Fela! directed by Bill T. Jones. Other theater credits include: “Wobledo” directed by Tony Award winner Trazana Beverly, performed at the Williamstown Theater Festival, Judson Memorial Church and Dance Theater Works, “The Rights of Passage” performed at the Tribeca Performing Arts Theater, “A Girl’s Tears on A Woman’s Face” performed at Jamaica Center for the Performing Arts, “The Colored Museum” and “For Colored Girls” both performed at the Old Castle Theater in Bennington, Vermont. Iris has performed live on “The View”, “The Colbert Report”, “Late Night with Jimmy Fallon” and the 2010 “Tony Awards”. She is also featured in the “Fela!” commercial, and she has served as a celebrity judge on the Bill Cunningham Show “Bust The Move.” In addition, Iris has performed both nationally and internationally with “The Fela Band”. She has also recorded with Stephen Marley singing background on his latest release “Made In Africa”. Her film credits include the following shorts: “Earl’s Post Prison Playdate” OBC productions (seen in UrbanWorld Film festival and Bossip), “Love Train” and “Reverend M” Oreh productions. Iris has performed nationally and internationally with various dance companies such as Opus Dance Theater Inc, Bouso African Dance Company, Haiti Dancsco, Dinizulu African Dancers and Drummers and Kanu Dance Theater. As a choreographer, her work has been presented in the first Black National Dance Festival in Vienna Austria, the International Dance Festival in Costa Rica and the world’s famous Apollo Theater. She has taught master dance workshops at American University in Washington D.C, Oakland University and The University of Michigan, and OCD Dance School in San Francisco. With a master’s degree in dance education from NYU, Iris has taught dance at P.S./I.S 268 in New York to students in grades K-8. During her six years there, her students were selected to perform in the NYC Dance Educators annual dance festival sponsored by UFT. They were also selected to perform in P.S. Arts Week at the Apollo Theater and for the National Crime Victim’s week at the Queens County Court house. Iris has also been a hosting teacher sponsoring and mentoring student dance educators from NYU, and she see served as a staff developer for the NYC department of education dance program. She is the Co- Founder of It’s Dance, a community based dance school located in Queens, New York. Through It’s Dance, Iris started the first Children’s Black Dance Conference in Queens. This was an initiative to bring community dance schools together to learn, perform and celebrate Black Dance in America. She is the author of the children’s book “Boys Dance Too!” a book that looks beyond the stereotypes of a male dancer and encourages young boys to dance.

Children of War (COW) choreographed by Iris Wilson and directed by Regge Allan Bruce, examines what war looks like through the eyes of child soldiers. Using a blend of choreography, music, and storytelling, COW follows the horrific journey of young boys who are displaced from their homes, whose childhoods are interrupted and innocence lost through a series of traumatic events unfolding in the wars in Southern Sudan, Sierra Leone and the Congo.