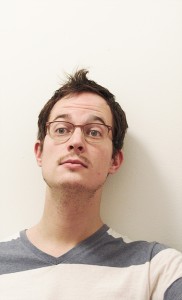 Henning was born in Germany, grew up in Oregon, went to school in Minneapolis, and now works out of Brooklyn, NYC, as a freelance commercial animator. This work allows generous freetime to partake in many doodlings and dabblings, including drawing, sketch comedy, programming, science, classical guitar and melodica.

“When my mind wanders, I like to think about how to break down natural phenomena into their essential, generative parts so I can recreate them on the computer. I have the scientist’s obsession with reduction and emergence, and it only got worse when I learned how to program. I have worked on fractals, growing algorithms, artificial evolution, artificial morality, and spirographs, which I thought evoked the nested orbital trajectories of planets. Sometimes though, I will just make something pretty.”

“In artistic mode I like to mix science with surrealism. The simplest parts of a motion, or an emotion, can be informative but also disturbing when isolated from the whole cascading event. Impressionism typically eludes me because you’re seeing the reflection of the phenomenon after someone else’s mind has developed it. I would rather show inside the black box.”