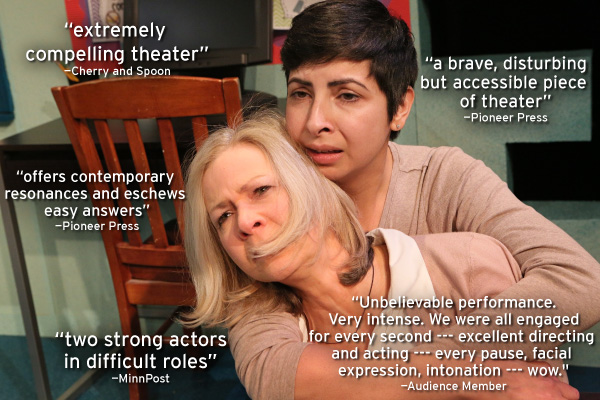 “There are many things to admire about Johnna Adams’ play, “Gidion’s Knot,” now on stage at Pillsbury House Theatre. It’s a brave, disturbing but accessible piece of theater that offers contemporary resonances and eschews easy answers.” Read the full review »

“A topical two-hander about free speech, violence and the effects of bullying, Adams’ play is a study in tragic tension.” Read the full review »

“All you need to know is that it’s an intense 90 minutes of theater dealing with issues that face kids and parents and teachers today, well-written and brilliantly acted.”

“The two spar for more than an hour, giving the two actors, Laura Esping as Ms. Clark and Aditi Kapil as Corryn, a challenging platform on which to thrive. Johnna Adams’ script provides them both a chance to create characters with real depth and plenty of rough edges to create friction” Read the full review »

Artscape: On “Matisse” at MIA, “Gidion’s Knot” at Pillsbury, and ticket-buying issues at Orchestra Hall
by Pamela Espeland, MinnPost

“It has taken Johnna Adams two decades and a similar number of plays to achieve a taste of the commercial success of which most American playwrights dream. And she is one of the lucky ones.” Read the full story »