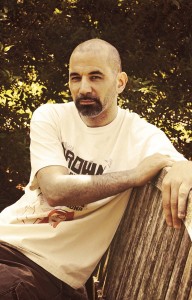 Emmanuel Ortiz is a Latino writer and community organizer. He is a founding member of Palabristas: Latin@ Wordslingers,  – a Latina/o poets collective based in Minnesota. He has authored 2 books of poetry: The Word Is a Machete: Post-Pocho/Puerto Rican Poems of the Personal and Political (Pocho Rican Press, 2003), and Brown unLike Me: Poems From The Second Layer Of Our Skin (2008, Calaca Press). He received the Verve Grant for spoken word poets in 2005. His writing has appeared in numerous publications, and he has performed his work across the country. Emmanuel recently joined the staff at Pangea World Theater

Años de los Muertos is a montage of spoken word narratives memorializing some of the uncountable Latinos who have died tragically or have been killed in the United States.