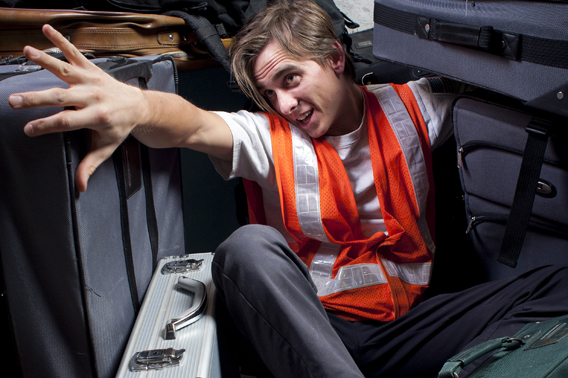 In the world of an airline baggage handler, TSA patdowns, labor rights disputes, terror alert levels, and jet fuel surround the lowly laborer. Bagman combines live music, masked characters, storytelling, and projected images to reveal the chaos of a life where days flow between brutal acts and dreamlike flight, and heavy baggage is the bane of the bagman’s day.

BIOGRAPHY: When not slinging baggage at the airport, David works as artist, teacher, and musician – often combining puppetry, projection, and poetry. In addition to David’s independent performance-making, he enjoys working as a freelance video projection designer and performer with various theatre and dance companies in the Twin Cities including Hinterhands, Theatre Novi Most, Annicha Arts, Workhaus Collective, and Barebones Productions. David graduated in 2010 with a B.A. in Theatre Arts from the University of Minnesota, and for the past four years has been a member of MAW (Minneapolis Art on Wheels) – projecting light and sound in public art events and guerrilla urban interventions. Elsewhere onstage, and in basements, David makes music as a member of The Big Sillies playing trumpet, guitar, and singing.