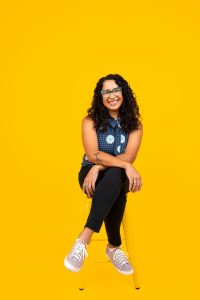 Cristina Florencia Castro is a playwright/performer who hails from San Antonio, Texas and has been based in Minneapolis since 2007. Cristina is Teaching Artist with Upstream Arts, a Twin Cities based non-profit that uses the power of the creative arts to activate and amplify the voice and choice of individuals with disabilities. Her recent short play May Yamoe… was produced as part of Pillsbury House Theater’s She Persists: The Great Divide III. Cristina was a 2017-2018 Nashville Repertory Theatre Ingram New Works Playwright and 2015-2016 Jerome Many Voices Fellow at the Playwrights’ Center. Cristina’s play, How The Colds Were Razed (As Told By Gorilla Girl), was a finalist for the 2018 Latinx Theatre Commons Carnaval, and her play The Very Last Wishes of Grandpa Joe or Mia & Hector Go Sightseeing, is available to audio stream via Season Four of The Parsnip Ship. Cristina has taught playwriting for Saint Paul Conservatory for Performing Arts and for the Jungle Theater’s Jungle Writes program.

As a performer, she has acted in the Twin Cities with theaters such as Ten Thousand Things (The Winter’s Tale), TransAtlantic Love Affair (The Devout), Penumbra Theatre (For Colored Girls…), Artistry (Wit), the Jungle Theater (Anna in the Tropics), Daleko Arts (The Shape of Things), Market Garden Theater (Three Days of Rain), Mixed Blood (The House of Spirits), Park Square (August: Osage County), and others.

Cristina was a 2008 National YoungArts Foundation Silver Award Winner in Playwriting and is a 2011 alumna of the University of Minnesota/Guthrie Theater B.F.A. Actor Training Program.