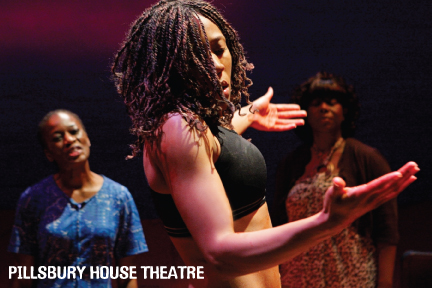 Christiana Clark did not plan to launch her artistic career in Minneapolis. While attending the American Academy of Arts in Los Angeles in 2001, Christiana needed to leave school to come home and help her family. Soon she had one of her first professional acting jobs at Pillsbury House Theatre with Breaking Ice. “The dedication of the artists, the creativity within the forms of theatre that were being used—I was stretched and opened up to a whole new way of doing what I do,” she recalls. Since then Christiana has been a part of everything on stage at Pillsbury House Theatre (4 Chicago Avenue Projects, 3 Breaking Ice shows, and 2 Mainstage productions, including starring in the recent In the Red and Brown Water). She has now performed on some of the largest stages around the country from the Goodman Theater in Chicago to the Dallas Theater Center, and she still sees Pillsbury House as her home, providing her with some of “my best experiences in the theatre and, consequently, in my life.”

$650 allows us to hire a high-caliber performer like Christiana for one week. Your donation makes this story possible.

photo of Christiana Clark by Michal Daniel in In the Red and Brown Water, 2011