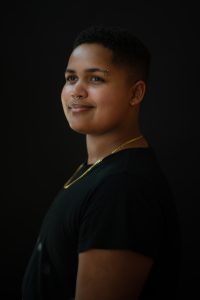 In non-pandemic times, C. Michael Menge (They/them & he/him) is an actor, improvisor, theater-maker, and playful  young fool known for their work with the Jungle Theater (Hand to God; Little Women; Redwood), The Boys of the Year (BOTY Presents: Peter Pan and Wendy), Children’s Theatre Company (Snow White), the Black Ensemble Players (A Midsummer Night’s Dream), The Playwrights’ Center, Blackout Improv Comedy, and more. They are currently one of the co-coordinators of both the Black & Funny and Queer & Funny improv festivals at HUGE Improv Theater, and in 2019 were named Best Actor by City Pages.

We’ve got what you want. Come and get it. Ring in the year 2000 with C Michael Menge and Jay Owen Eisenberg as they giddily mess around with transmasculine love, non-stop spectacle, and other stuff that literally makes them scream.