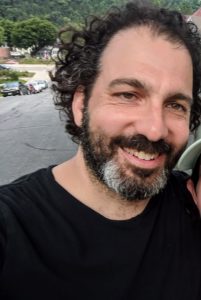 Alan Berks is co-Artistic Director of Wonderlust Productions, based in St. Paul, where he writes, directs, produces, and faciltates community-engaged art like In My Heart: The Adoption Play Project; Our House: The Capitol Play Project; and the upcoming The Labyrinth and the Minotaur: The Incarceration Play Project. (Learn more at wlproductions.org) As a writer, his adaptation of Luigi Pirandello’s Six Characters in Search of an Author, set on the production of reality television, was seen at Park Square Theatre in 2016, and Complicated Fun: The Minneapolis Music Scene premiered at History Theatre. As a founding member of Minnesota’s innovative Workhaus Playwrights Collective, he created Music Lovers, The Great Divide, and Feast of Wolves. Other plays include: Goats, Almost Exactly Like Us,#ringtone, 3 Parts Dead and others which have been seen around the country. He is an Affiliated Writer at the Playwrights’ Center in Minnesota and co-founded MinnesotaPlaylist.com. More information at alanberks.com